9 Tips for Mickey's Not So Scary Halloween Party 2018 Edition 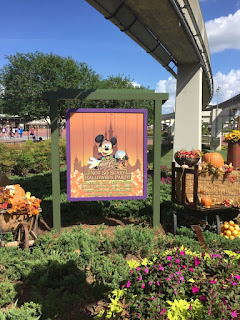 It may be August and kids are just getting back to school, but it’s finally Halloween in Walt Disney World!  Fall decorations went up last week in Magic Kingdom and the first Mickey’s Not So Scary Halloween Party was August 17!  There’s so much to do at the party and it’s one of my favorite events in all of Walt Disney World.  I’ll be making my way there in September (when it hopefully cools down a little), but here are some tips to help you make the most of your time at the party! 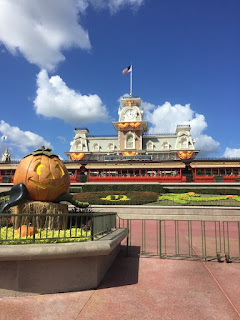 Magic Kingdom all decked out for Halloween
1)      Enter at 4:00PM -While the party officially starts at 7:00PM, your MNSSHP ticket has historically allowed you to enter the Magic Kingdom as early as 4:00PM.  Make sure you go through the Halloween Party Turnstiles which are located on the right-hand side, next to Guest Relations.  Once you enter the park, you’ll get your MNSSHP wristband and a party map. There’s even a special trick or treat station set up, so you can get a head start on your trick or treating.  You can also get your picture taken at several photo-ops and props. Once you have your map and your treats, use this time to ride attractions that are not running during the party (I’m looking at you Enchanted Tiki Room) or get a bite to eat, so you’re ready to go once it’s party time! 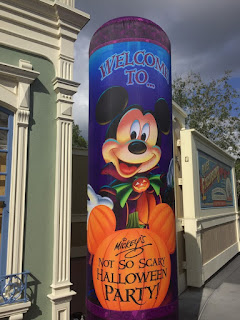 The entrance to Mickey's Not So Scary Halloween Party
2)      Bring Your Own Trick-or-Treat Bag -When you enter the park for the party, you are given a bag to hold your spoils from the trick-or-treat stations.  However, this bag is small and made of paper.  Any trick-or-treater knows that it’s just not going to cut it.  I like to bring a drawstring backpack to make carrying the candy easier.  There are also allergy friendly options for trick-or-treaters! 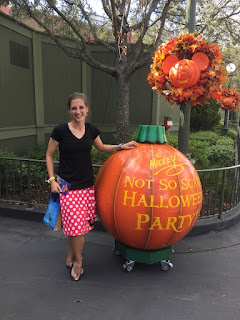 Photo-op just inside the entrance to the party
3)      Get in Popular Character Lines Early -One of the biggest draws of the party is the unique character meet and greet opportunities.  Some of the most popular are Jack & Sally from The Nightmare Before Christmas, the Seven Dwarves, and Moana.  Popular characters often start their meet and greets before the official party start time of 7:00PM.  Make sure you line up early if these are important to you! An alternative is going towards the end of the night, when lines can shrink, but keep in mind some characters may not be available later in the evening! 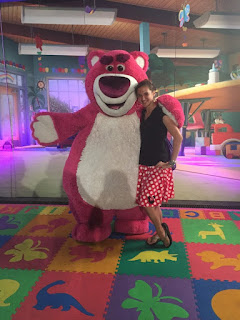 Meet Lottso in Tomorrowland
4)      Don’t Forget About Party Exclusive Snacks -In recent years, both the Halloween and Christmas parties have had exclusive totally Instagram-worthy snacks.  This year is no exception.  These snacks are at various locations throughout the park, and your guide to the party will let you know exactly where you can grab them.  Don’t forget about Mobile Order! 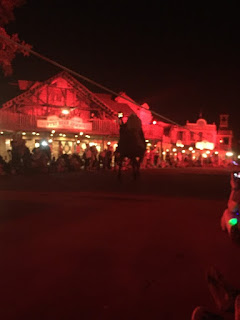 The Headless Horseman rides through Frontierland
5)      Watch the Second Boo-To-You Parade -It’s a good rule that when there are 2 parades nightly, the second one will always be less crowded.  This is definitely true of MNSSHP’s Boo To You Parade.  The only exception to this rule is if there’s a possibility of inclement weather later in the night.  If the forecast looks dicey, see the first parade.  This is a parade that is either amended in weather or doesn’t run at all.  You can view the parade on Main Street U.S.A. where Nick Wilde and Judy Hopps from Zootopia entertain before the parade or in Frontierland where the “Cadaver Dans” serenade the crowd.  Watch out for the Headless Horseman! 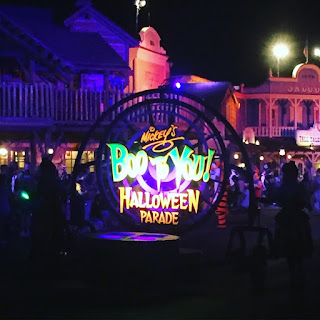 Mickey's Boo To You Halloween Parade
6)      Hallowishes -One of the highlights of the party is Hallowishes, the fireworks spectacular featuring 180 degree fireworks and showcasing the Disney villains.  While the show does use some projections, it’s nowhere near what’s done during Happily Ever After.  So while, you should see the show from Main Street or the hub at least once, you can pick any viewing area around the park.  I like the unique perspective that watching from Fantasyland provides 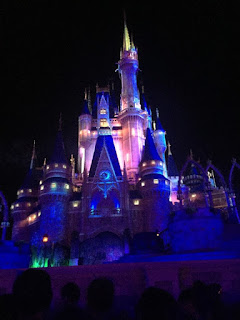 Cinderella Castle just before the start of Hallowishes
7)      Run Amuk, Amuk, Amuk -My FAVORITE part of the party is the Hocus Pocus Villain Spelltacular.  Presented three times per party, this castle stage show is not to be missed!  The casting for the Sanderson sisters is spot on and they’re dead ringers for Bette Midler, Sarah Jessica Parker, and Kathy Najimy.  Plus, you'll get to see Disney Villains that you may not see elsewhere.  It’s so much fun and a rockin’ good time.  I like to either catch one of the earlier shows to start the party off right, or catch the midnight show at the conclusion of the party.  Get your viewing spot 30 minutes in advance! 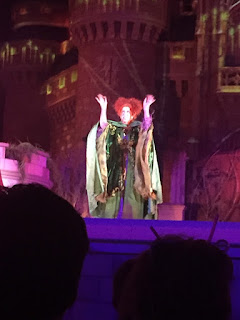 Winifred Sanderson in the Hocus Pocus Villain Spelltacular
8)      Enjoy Shorter Wait Times for Popular Attractions -With less guests than a typical day at Magic Kingdom and so many special shows and offerings drawing the attention of many park guests, wait times for rides are way down!  If you’re a ride person, then this is a great time to ride all your favorites!  However, since you can ride the rides on any trip to the Magic Kingdom, I try and spend most of my time enjoying the seasonal offerings! New this year, several attractions are also getting into the Halloween spirit! Mad Tea Party has new lighting, Space Mountain has a new soundtrack and is completely dark and live actors have been added to Pirates of the Caribbean!  I'm excited to try these new updates! 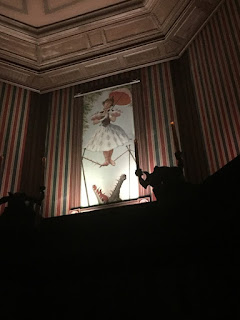 It's only fitting to ride the Haunted Mansion during MNSSHP!
9)      Prioritize -Since there is so much to see and do at Mickey’s Not So Scary Halloween Party, it’s impossible to do everything in one party!  Decide what is most important to you and your tour group.  Is it the parade? The show? Fireworks? Meet and greets?  Have a plan before you go in!  With a plan last year, I was able to secure good spots for Hallowishes, the 2nd Boo To You Halloween Parade, and the Hocus Pocus Villain Spelltacular.  I also met Donald & Daisy, Cruella DeVil, and Lottso.  I was able to ride Pirates of the Caribbean, Haunted Mansion, Peter Pan, the Peoplemover and It’s A Small World.  In fact, I hopped on It’s a Small World at midnight so I was all alone in a boat and the only one on the ride…it was awesome! 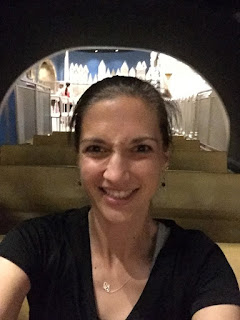 Closing down It's a Small World at the End of the Night!
What are you looking forward to most at this year's Mickey's Not So Scary Halloween Party?

Still planning your trip to Walt Disney World? Let me help! I am an authorized Disney vacation planner with an earmarked agency, Magical Adventures Travel.  E-mail me at kellyp@magicaladventurestravel to get your free, no-obligation quote today!