The best of Disney's Animal Kingdom

March 08, 2018
The more time I spend in Disney's Animal Kingdom, the more it climbs the list of favorite Disney parks.  As the park celebrates its 20th Anniversary this year (I can't believe it's been open 20 years already!), here's a list of my favorite Animal Kingdom experiences.

Rope Drop -The first time I experienced rope drop at Disney's Animal Kingdom, it came as a complete surprise.  We had finished the Jingle Jungle 5K (back when that was still the title) and since we were already in Animal Kingdom, we entered the turnstiles as soon as they started letting guests in.  The plan was to head to Kilamanjaro Safaris before our breakfast reservation at Tusker House.  This was during those quiet days before Pandora -the World of Avatar opened.  Imagine our surprise as we were standing in front of the Tree of Life when a flock of parrots came flying overhead.  They landed in front of the tree for a few minutes then took off flying again.  It was absolutely incredible and one of the coolest surprises and ways to open the park. 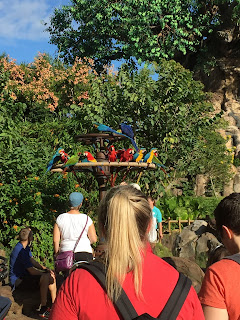 Parrots on their landing perch
Kilamanjaro Safari -This is one of those rides that I could enjoy all day.  Because the animals are in their habitats and have freedom to roam, it's never the same experience twice.  I really enjoy starting my day with the safari as the animals are super active in the morning before the temperature rises.  Sometimes, you can even see the keepers feeding the animals.  I also love coming back to the safari after the sun has gone down for one of the nighttime safaris.  Yes, you see fewer animals at night.  However, different animals are active and you get to hear the noises the animals make that you never get to hear during the day.  There's nothing like hearing the lions (who are active at night) let out their signature roar. 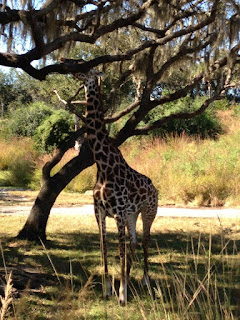 Up close to a giraffe
Expedition Everest -Animal Kingdom's signature roller coaster is also one of Walt Disney World's finest.  Board a train bound for the summit of Mt. Everest, but beware of the mysterious and frightening Yeti.  This coaster races through the mountain both forwards and backwards, but does not go upside down. It's also one of the only places in Walt Disney World that breaks the plane.  Look around on the way up and take in the views of Spaceship Earth and Tower of Terror (if you can keep your eyes open!) 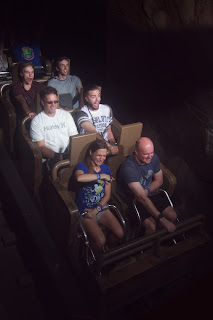 Riding Everest with my dad
Festival of the Lion King -One aspect of the theme park experience that Disney does better than anyone else is the quality of the shows.  Festival of the Lion King may be my favorite show at Walt Disney World (not counting nighttime fireworks shows).  The Lion King was one of the classic Disney movies I loved as a kid, so I have such a soft spot for the music.  Also, the performances are incredible.  The show features singers, dancers, acrobats, giant floats, even fire dancers!  Pro tip:  Sit towards the front if you want your kids to have a chance of being included in the show! 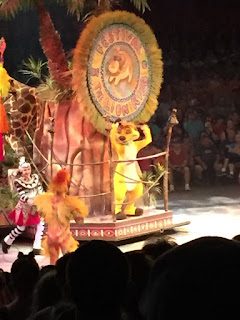 Timon dancing during the Festival of the Lion King
Flight of Passage -I could really add the entirety of Pandora -the World of Avatar to this list, but Flight of Passage is in a class of its own as far as attractions go.  I've heard it described as "Soarin' on steroids" and while maybe that conveys the "motion sickness" factor of this ride, it's so much more than that.  The first time I rode it, I waited in line for about three hours.  Totally worth it!  First of all, there's a ton of details to take in as you meander your way through the main queue and riding standby is the only way to see the giant avatar in the tank.  After you go through the three pre-shows, you finally enter the link chamber to take flight.  This ride is the closest thing to flying I've ever experienced and it's absolutely incredible.  It lives up to the hype...do.not.miss.it. 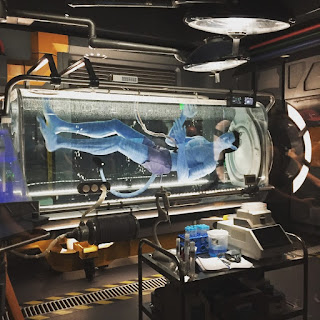 Giant avatar in the tank
Pandora -Pandora -the World of Avatar, the biggest expansion to Disney's Animal Kingdom in its twenty year history needs to be seen to be believed.  The environment is beautiful and immersive.  In fact, I often play the game of "is this plant real or fake?"  It's hard to tell!  Take the time to take in this amazing area.  In particular, try to be in Pandora as the sun goes down to experience the transition from light to dark.  It's amazing! 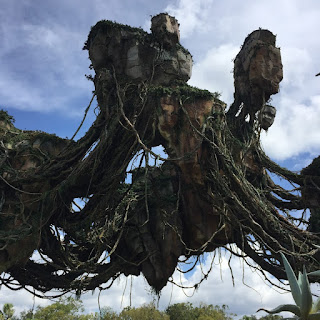