December 05, 2017
Hi everyone and happy Tuesday!  For this week's Tuesdays On the Run, the topic is "favorite race of 2017"  I have to admit, I was having a hard time choosing which was the best.  2017 was a fantastic racing year for me.  I set new PRs and even earned my coast to coast medal!  However, my favorite race of the year was the 2017 Cedar Point Half Marathon.

The Cedar Point Half Marathon is part of the Run and Ride Race Series which features races all around the country ranging from 1 mile fun runs to half marathons at some of the best theme parks out there!

This past June, Nicole and I both participated in the run and ride weekend at Cedar Point.  Nicole ran the quarter marathon and I ran the half marathon.  The main reason this was my favorite race of the year was this happened: 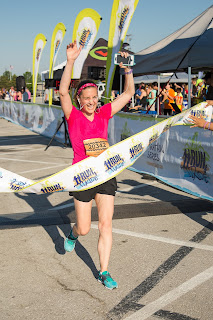 Yup, I broke the tape!

I still can't believe this was a thing that happened!  I had so much fun running through the park and then the streets of Sandusky, OH.  This is my proudest racing moment of 2017.  I'm going to try to be back in 2018 to defend my title!