May 10, 2018
It's hard to believe it's almost been two weeks since I finished the NJ Half Marathon. It was great to participate in this event again.  Four years ago, the NJ Marathon was my very first ever marathon.  I had a great experience running that race and I was excited to run down the shore again.  I had never run the half marathon course, so I was thrilled to see what these 13.1 miles would have in store for me.  The first stop on Saturday morning was the race expo which was held at the Monmouth Racetrack. 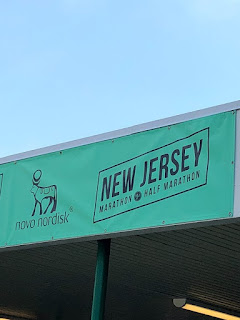 There were tons of banners welcoming runners to the expo 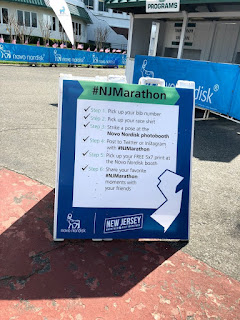 I really appreciated the expo having such clear instructions! 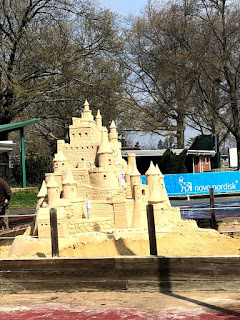 This great sandcastle was just inside the entrance to the racetrack 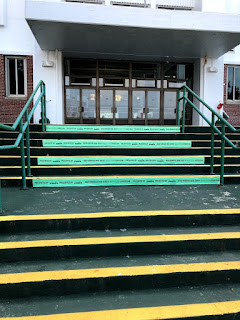 Leading the way into the expo
The race expo itself was well organized, though a little underwhelming.  When I did the marathon four years ago, it seemed like there were many more vendors.  I distinctly remember buying sweatybands here that year.  However, there were almost no vendors at this year's expo.  We had planned to spend a little time there, but were in and out in about 30-40 minutes.  This highlights the organization of the expo and the speed in which we were able to get our race bibs and shirts. 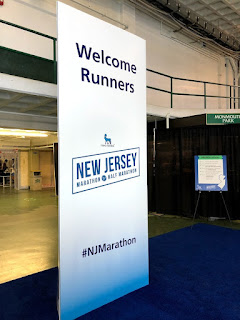 Even the entrance seems empty 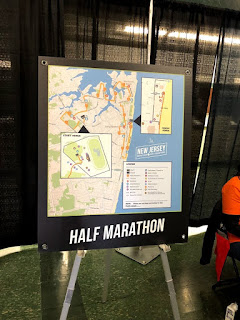 Half marathon course map
Around 5:00AM on Sunday morning the alarms went off and we were out the door by 5:30AM (this is why you organize all your gear the night before a race).  An hour later we were back at the Monmouth Racetrack, the location of the start line.  This course is point to point, so you park at the start and take a race shuttle back to your car after the race.  You can pay to park at the finish line and shuttle to the start, and should we do this race again, I think Nicole and I would consider doing that.
The morning was cool and rainy and both Nicole and I were slightly grumpy.  However, once we loaded into corrals, it was easy to let the excitement of the race pick up my spirits. 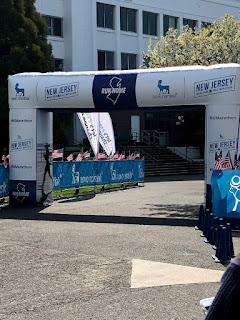 The start line
There were seven total corrals.  I was in corral 3 and Nicole was in corral four.  Corrals were released about every 2 minutes.  Each corral took off with the sound of a bugle horn, which was appropriate since we were at the track!
The course is fast and flat and had a surprising amount of crowd support.  Sometimes when you run through neighborhoods, it can be silent, but lots of locals were out and cheering on the runners.  Plus you finish along the shore, which always makes this Jersey girl happy!
I wasn't thrilled with my time, just over 1:39, but it's still under 1:40 and definitely better than the Rochester Half marathon the weekend before.  But finishing a half marathon is definitely an accomplishment and my goal race isn't until July. 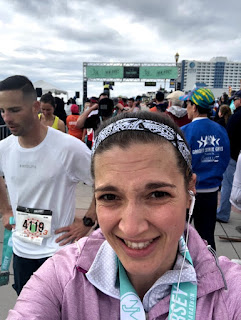 Finish line selfie
I'd definitely run this race again, hopefully with slightly better weather.  Have you ever run the NJ half marathon or the full marathon? What did you think?